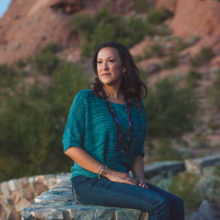 Someone asked me the other day why I do what I do (referring to this blog and my Facebook page). What’s the point in spending all that time coming up with content to brighten people’s day? Why study about meditation and chakras and oils and stones and self-care and take the time to post it on a Facebook page for a bunch of people I haven’t ever met in person?

Are you ready for a story? This is where it began:

Back when I was around 10 years old, my dad and I were out on the property (5 acres outside Oklahoma City) and had been to the garden to pick summer’s bounty of blackberries. By the time we had finished gathering berries and started heading back to the house, it was getting dark. We followed the path toward the house and dad was telling me about the stars. We came to the natural bridge between two little creeks where I would fish for crawdads by day and, to get a better look at the stars, we decided to just lay down there on the cool grass. He showed me how to locate a few constellations and that was cool, but the part that really struck me was the space and the freedom in that moment. We could have been there for 5 minutes or two hours. I don’t know. And I don’t care. What I do care about is that it was the first time I can remember being truly present in the moment and old enough to be able to “know” that I was being present.

Ever since then, I have longed for such moments in time. Moments when nothing else matters but NOW. Moments when all the cares of the world melt away. Moments when I am tangibly aware of the divine all around me. Sometimes I can find them in seemingly mundane moments of the day like sitting at a stop light or waiting for my kids to get out of school. Other times I find that same stillness in meditation or practicing yoga. I have realized that I can also find those moments when shopping for stones for someone or creating an essential oil kit that meets someone’s needs.

But do you want to know what my biggest take-away is? It’s not any ONE of those things that allows me to pause and breathe and experience the oneness with all things. It’s all of those things and MORE. The ability to find the peace and stillness isn’t found in one magical object or technique or practice. Finding and creating space for quieting our minds leads to our inner transformation. And that truly takes all of our lives to do. It’s not only in the 20 minute meditation before we get out of bed. That meditation sets us up for mindfulness so that when we get to the grocery store and the line is ridiculously long, instead of seeing a mini-tragedy, we see God. It’s not only the 90 minute yoga practice (no matter how awesome it is), but the attention to breath we carry with us long afterwards, so that when the stress of life happens we respond with a deep cleansing breath instead of a nervous breakdown.

The Source Energy isn’t only in those special moments when we set aside time to connect.

The Source Energy is in

And this is why I do what I do. To live a life of practicing awareness in each moment and share my experiences along the way. Then to post those experiences on a random Facebook page so that all of us looking for those beautiful moments have a place to share them together.

Thanks for joining me on this journey. It is an honor to share it with you. Namaste.

I ain’t scared….I’m completely freaking out! 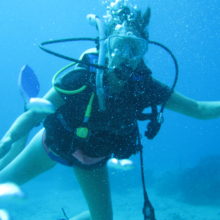 Even the word can make us start to get a little nervous.

Want to know what I’m afraid of? Or at least used to be afraid of…well, let me tell you a little story…

This summer my family took a dream vacation to a beautiful island in the Caribbean. We experienced all kinds of cool things that week, but what I want to tell you about today is my first time to go scuba diving.

I must pause here to warn you that I will likely say I was “freaking out” about 34 times in the next paragraphs. Reader – be warned!

The first day was dive training day. We spent most of the day in the diving pool. We learned about the gear, how to get it all set up and put it on. We learned how to breathe with the regulator (the thing you put in your mouth) and each of us went to the bottom of the pool for a few minutes to learn how to take the regulator out, put it back in, clear our mask if/when it filled up with water, and how to adjust our buoyancy so we were neutral in the water – neither sinking nor floating.

When it was my turn, I got all my gear on and was feeling pretty good about everything. That is, until the first time I actually had to GO UNDERWATER and BREATHE! To say that panic set in would be a massive understatement. I began to freak out (for the first of the 34 times)! I could not  comprehend any thoughts other than – “breathe in, breathe out, breathe in, breathe out.” 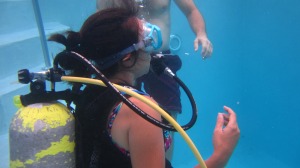 Sitting on the ledge – breathing…

Another pause – I’d like to note here that I am something of a “professional” breather. : ) I am a yoga trainer and so I teach all kinds of breathing techniques and practice them ALL THE TIME. I have spent hours upon hours focusing on my breath, breathing, and teaching other people how to teach other people how to breathe. It’s kind of my thing. That’s partly why this whole situation caught me quite off-guard. But anyway…

So, not knowing what he had gotten himself into, our trainer/friend, Ted, thought it might be a nice idea to let me sit on the ledge and just breathe for about 15 minutes. So I did. And it was a full 10 minutes before I was able to even look around the pool. I was seriously disoriented and scared out of my mind. So far, so good, right?

When it was time to go down to the bottom of the pool to practice, it took me about three tries just to get down there and stay down without hitting my jet-pack button to shoot me straight to the top! On the third try, I was able to get over it (kinda) and stay down there long enough to go through the exercises. And surprisingly, it went ok. I felt ok. I WAS ok. I think I can do this! After the rest of the fam had their turns, I had a second turn. Shoot. Same thing – freak out and panic twice, go all the way down on try number three. But this time I felt even more comfortable on the bottom. By the time we were done, I was feeling ready to give it a try the next day in the actual OCEAN.

Little did I know how much WORK it was going to be to get to the place where we would begin the actual dive! We did a beach entry and kicked out a pretty good ways (200 yards-ish) to a buoy to drop down. This was so much harder than I could have imagined! I am a very buoyant person, so I had a LOT of weights on my weight belt which made my hips feel like they weighed about 20 pounds more than they actually do. Also, those air tanks are not light! With the vest and the air tank and all the weights on my belt, I felt like I would most certainly sink if I didn’t kick like my life depended on it. By the time we got to the buoy, I was utterly exhausted! I couldn’t get on top of my breathing, I was taking in salt water like it was going out of style and this is when I started to REALLY freak out. 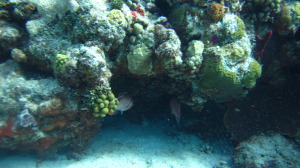 I had no idea it could be so beautiful!

My friend Ted was with me and he was doing an awesome job with the small talk to keep my mind off the feeling that I was about to drown. But when he stopped and asked how I was doing, I didn’t really know what to say. I wanted to take the vest off and swim to shore and forget the whole thing right then and there. I started to think I wasn’t going to be able to do this after all. But, I REALLY did want to do it! So, trying to be a big girl, I said that I was mostly ok, but having a hard time because I was feeling like I was sinking and I was taking in too much water, and also, I couldn’t breathe so well. He asked me if I had sunk to the bottom yet. Well, no. I guess not. So, you ARE floating then, right? Yes. Ok….I guess that’s true. And then he had a brilliant idea – go ahead and put the regulator in my mouth and start breathing so I could stop swallowing water and maybe calm down a bit. It worked pretty well. I was able to stop freaking out and panicking and felt somewhat better. As a last-ditch-effort to get me to follow through with the whole thing, Ted said he would hold my hand. That sealed the deal for me. I would at least try. Ok. Now to drop down. We descended. About 10-12 feet down, I started freaking out again. Up I went. I fixed my mask, adjusted my vest, regained my composure. Ok. I’m ok. Let’s try again. We went down again and I made it to the bottom, which was only about 20 feet at this point. We stayed there for awhile. I got my bearings. I looked around. I realized it was pretty down there. REALLY pretty. I calmed down. I realized I was breathing just fine. Ok. let’s swim.

And before I knew it, it was time to head back in to the shore. Wow. I DID IT! I overcame panic and fear and uncertainty and DID IT! I felt so proud of myself! I felt amazing!

We went diving one more time that week. I faced the same fears, the same freaking out. the same panicky feelings, the same uncertainty. BUT, this time, I KNEW I could do it. I relaxed a bit more. I enjoyed it more. I even swam by myself (most of the time)! It truly was an amazing experience.

Here’s what I have learned since then. Facing my fears that day transformed me in ways that are still “coming to the surface.” I have more confidence in who I am and in what I can do. I now know that I can stand up to something that is hard or scary or that seems impossible for me and keep going anyway! I learned how to regain my composure even when I’m terrified and think things through and make empowering choices. 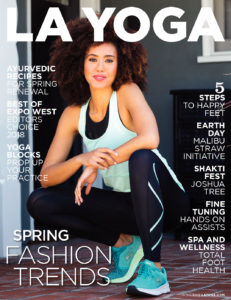 My Stay at CIVANA Carefree Resort 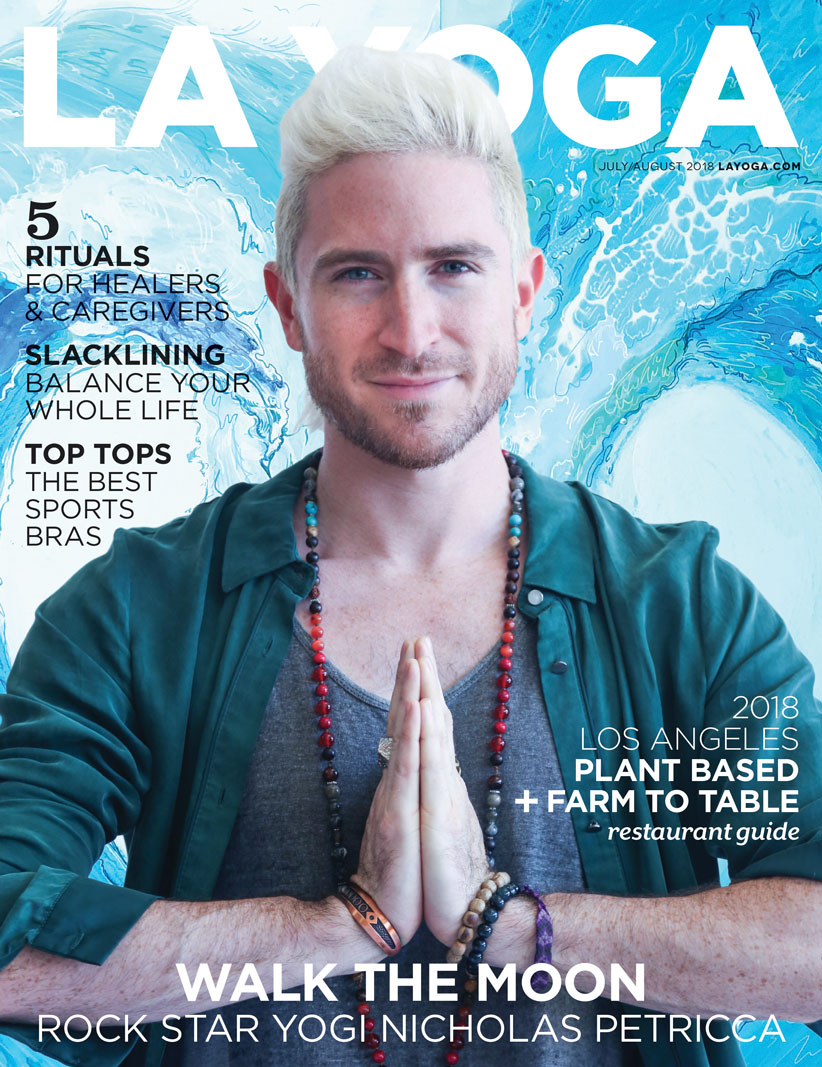